The human psyche and the desire

Life is manifested through a continuous alternation between tension and relaxation. Death occurs when this movement stops. Life responds to its own internal and external needs by activating one of the five oseis in a continuous and absolute interdependence with the other four. We will call this natural activation, which is autonomous and autogenous, A tension. This A tension can relax only when the vital need that originated it has been fulfilled.

In any species with CVP, the A tension triggers the activation, in a natural and conjoint way, of one of its five major organic systems including its biological function, its series of muscles, and its brain area together with its inherent psychic activity. The psychic activity does only arise in the human being. One million years ago, the human species began to make tools, an event that revealed the appearance of the outbreak of the conscious or consciousness.

One of the consequences of this outbreak was that the vital energy was not used exclusively to merely survive in a given time and situation but to increase the brain or psychic activity. As a consequence, the volume of the brain of the first hominids grew three times as large in only one million years.

The progressive process of energy conversion took place in conjunction with another exceptional and unprecedented process in the evolution of the species: the structural stability of the head. The human head sits on the CVP axis keeping its equilibrium on its own. This is possible thanks to the special horizontal formation of the articulation of the cranium with the first cervical vertebra in the f-e plane.
About fifty thousand years ago, the formation of the head was completed in the homo sapiens sapiens at the same time that his hands got free, he stood on two legs and feet, the structure of his pelvis became circular and horizontal, and the sole of his feet had three points of support.
We will use the concept f-e cranial balance to refer to this set of transformations undergone by our ancestor, the homo sapiens sapiens.
The f-e cranial balance was the completion of an evolutionary process of the nervous system and of the brain, which can be clearly seen in the vertebrates. For the first time in the history of evolution, the brain and psychic activity could be neatly perceived and expressed in a way that was both unique and revolutionary, and which have enabled us to acquire different types of learning and to create culture. La manifestación de la vida es una alternancia constante entre la tensión y la distensión o relajación. Cuando cesa este movimiento, sobreviene la muerte. Para responder a las necesidades vitales, tanto internas como externas, se activa alguna osei, siempre en una absoluta interdependencia con las restantes. 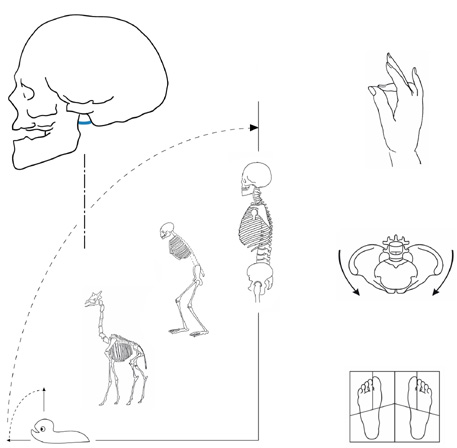 As a result of this special psychic activity, the A tension in the human being is intense and complex when compared to the same type of tension in the other species. We will call this A tension, desire.

Desire is the complex representation or expression of the vital needs of our organisms, their A tension, in the psyche of the human being. This A tension is channelled through any one of the five oseis, both in their active (-) or passive (-) modalitiesas shown below:

The A tension channelled through the central osei arouses the desire to love; the desire to think of each one of the members of one’s own family; the desire to act according to one’s own internal vibrations and which enable us to feel those of the other or those in the universe; the desire to communicate with people and things from the nucleus of the inner self; the desire not to fight but rather to trust or to hate.

The manifestation of each one of these desires also involves “the manifestation of some intense
susceptibility, preoccupation, and fear
about a possible failure in attaining the aimed desire”.
These feelings lie in a specific dimension of the spontaneous psyche.