It is formed around the “wharves” of the vertebral column and it involves the diaphragm, an involuntary muscle, and the serratus posterior, a voluntary muscle.

The chest-abdominal breathing is spontaneous and it is the most important organization to adjust, spontaneously, the CVP coordination. This is possible because the structure of this type of breathing is formed by the natural association between:
– the non conscious and the conscious
– the involuntary and the voluntary movements
– the autonomic neurovegetative nervous system and the central nervous system

This type of structure is what allows the chest-abdominal breathing to adjust the physical and psychic interdependence among all the activities of the five oseis + and -, as well as to show the exact state of the CVP and the degree of blockage reached by its spontaneous manifestation.
For example, the chest-abdominal breathing tenses and gets shorter as a result of some external problem that is troubling us. When this problem has been solved, this type of breathing relaxes and gets longer.

When deep breathing comes from the lower part of the abdomen and the chest expands in a natural way, we find psychic calm and physical health. Western and eastern traditional medicine knew that sick people who had some kind of physical or psychic disorders could not breath well.

Since today’s research on our organism is focused on biochemistry, some people claim that oxygen is the most important thing in our lives.
From the osei’s perspective what is crucial in our lives is the breathing movement made by our organisms. If this specific type of movement fails, all the oxygen in the countryside or in the mountains will be useless. 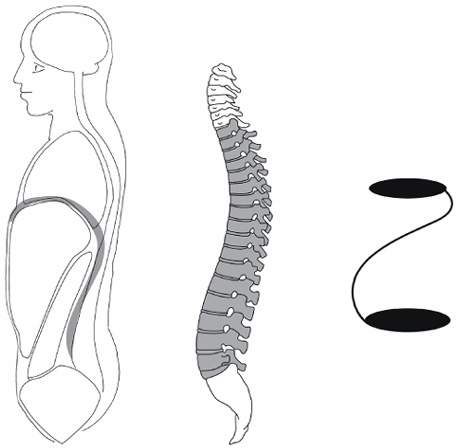 The width of the chest-abdominal breathing is subject to the flexibility of the diaphragm, which is organized around the “warf” of vertebral column’s curvatures

Life is based on the width between some strong tension and some deep relaxation. Nevertheless, when some tissues get permanently overexcited the width of our chest-abdominal breathing gets dramatically reduced. This disorder always takes place in conjunction with the EPT (Excessive Partial Tension) in vertebra Th7 that sits at mid level of the diaphragm, where all movements meet. The absence of this width in our breathing is responsible for our physical and psychic health problems.

The observation of the state of those organisms that had lost this width in their breathing lead chinese medicine (assimilated by Japanese traditional medicine) to establish fourteen meridians (plus six extra meridians) which were called “ancient energetic channels”. Chinese medicine’s diagnosis and healing methods are based on these meridians.

The osei framework can show us very clearly what these meridians are. 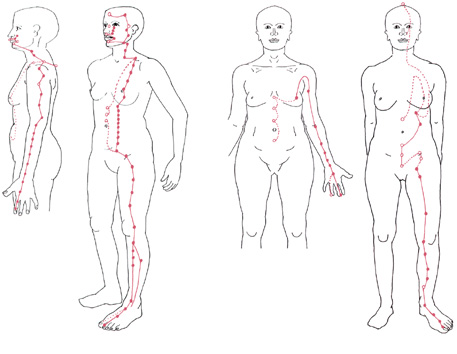 The osei framework shows how the fourteen meridians describe the interconnection that exists among those areas in the organism that each one of the oseis has formed. As a result, the following relation with western knowledge is possible:

Recent scientific research on the development of the embryo enables us to observe the appearance of five embryonic cellular groups, which correspond to the five oseis. This research also allows us to observe how the action of each one of these cell groups forms different parts of the organism.
The development of each embryonic cell group takes place by following exactly those ancient vital energetic channels discovered by chinese medicine thousands of years ago.

The way chinese medicine starts any healing process is by holding some short circuit in the vital intercommunication of the meridians responsible for some health problem and for the blockage of the chest-abdominal breathing width. The healing methods used by chinese medicine focus on the way to fix this short circuit and to restore the appropriate and vital coordination.

The discovery of the osei and of the osei framework tells us that the short circuit observed by Chinese medicine shows that the CVP coordination has been lost due to the blockage-dissociation of its spontaneous movement.