The osei framework, a breakthrough

The absolute interdependence of the actions of the oseis in the CVP brings out some of their essential characteristics that could not be seen when looking at each osei separately. These characteristics are:

The medullar quality is characteristic of the vertical (I and II) and the central (IX and X) oseis. The former osei forms the cranial cavity, the latter the pelvic cavity and both are linked by an axis. Their movements are static, namely, they allow us to remain apparently still. On the other hand, the peripheral quality is inherent in the frontal (V and VI), lateral (III and IV), and rotary (VII and VIII) oseis. These oseis form the chest, digestive, and urinary cavities, respectively. They are organized around the medullar structure of the CVP and they form the “vital oven of the organism”. Their movements are dynamic, namely, they allow us to move in the space.

The three regions of the CVP

The osei has structured the CVP into three regions, according to the plane-dimension where the five actions take place:

The f-e region of the vertical (f-e medullar and static) and frontal (f-e peripheral and dynamic) oseis occupies “the cranial and caudal extremes”, in the general CVP: head and chest-shoulders cavity, coccyx tip, and the femur-coxal area; at each curve of the vertebral column: cervical vertebrae C1-C2, thoracic vertebrae Th1-Th4 and Th12, lumbar vertebrae L1 and L5.

The bilateral region of the lateral osei (bilateral peripheral and dynamic) takes up “the mid area”, in the general CVP: digestive cavity; at each curve of the vertebral column: cervical vertebra C4, thoracic vertebrae Th6-Th9, lumbar vertebra L2.

The circular region, of the rotary (circular peripheral and dynamic) and central (circular medullar and static) oseis, occupies the “intermediate areas” between the extremes and the medial part and, especially, “the penultimate area”, in the general CVP: urinary and pelvic cavities; at each curve of the vertebral column: cervical vertebrae C3 and C5-C6, thoracic vertebrae Th5 and Th10-Th11, lumbar vertebrae L3-L4. 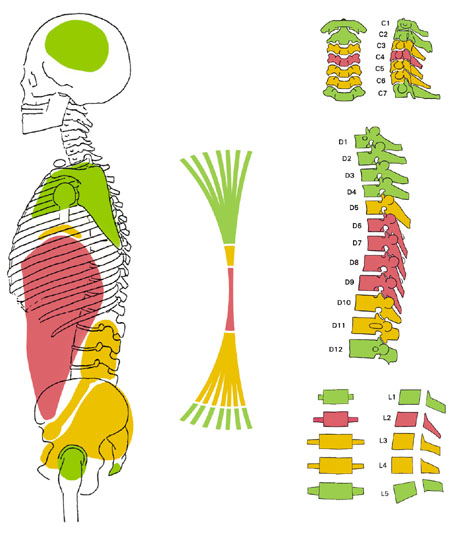 Whereas fish and reptiles move in the bilateral way mainly, mammals and birds move, chiefly, in the f-e plane. This kind of difference was crucial in the evolutionary process of the species since it allowed mammals and birds to develop their brains. This was possible due to the fact that the general movement of their CVPs took place in the same f-e plane, the site of the nervous system, which is always placed in a foremost and upper position in any living being. The human being’s vertebral column is one of the most important manifestations of this evolutionary process. Its curves are extremely important and they are defined, mainly, in the f-e plane. Thus, the following actions take place at each curve of the vertebral column (although any one vertebral articulation responds to all movements): 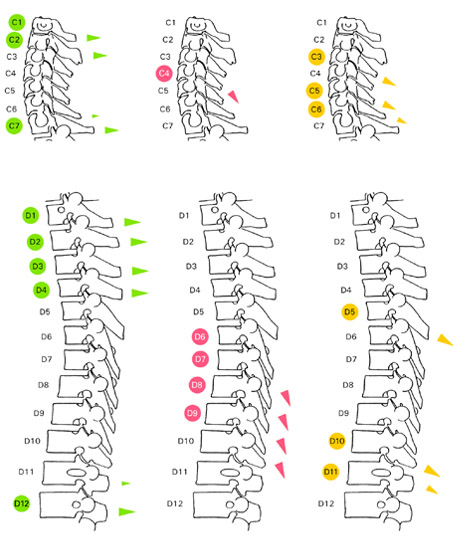 The thorny apophysis of the vertebra indicates the region to which it belongs:

This is a historical discovery made by Haruchika Noguchi about:

This type of structure, inherent in any type of physical, biological, psychic, or social existence, is a new universal model or paradigm that we will call osei framework.